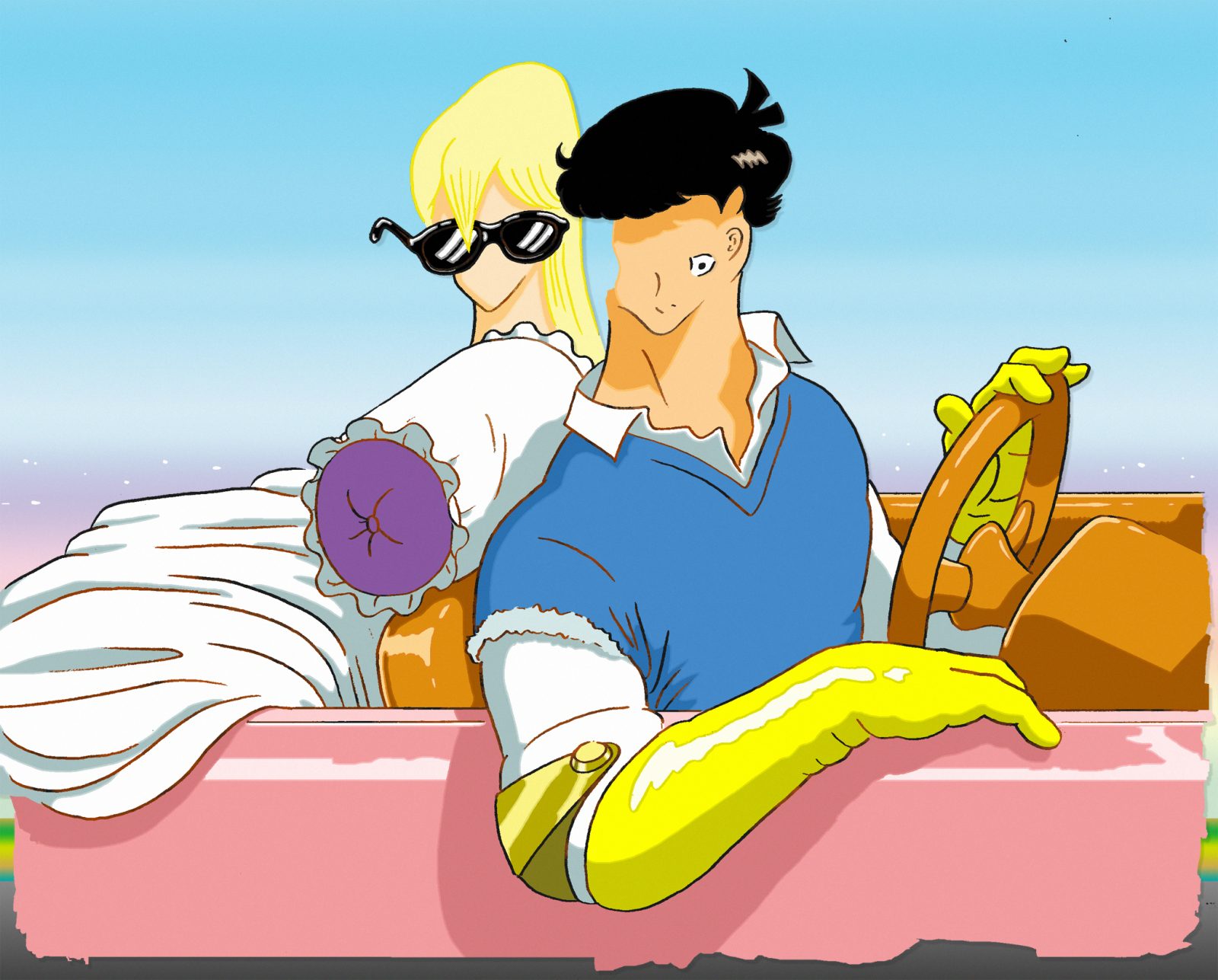 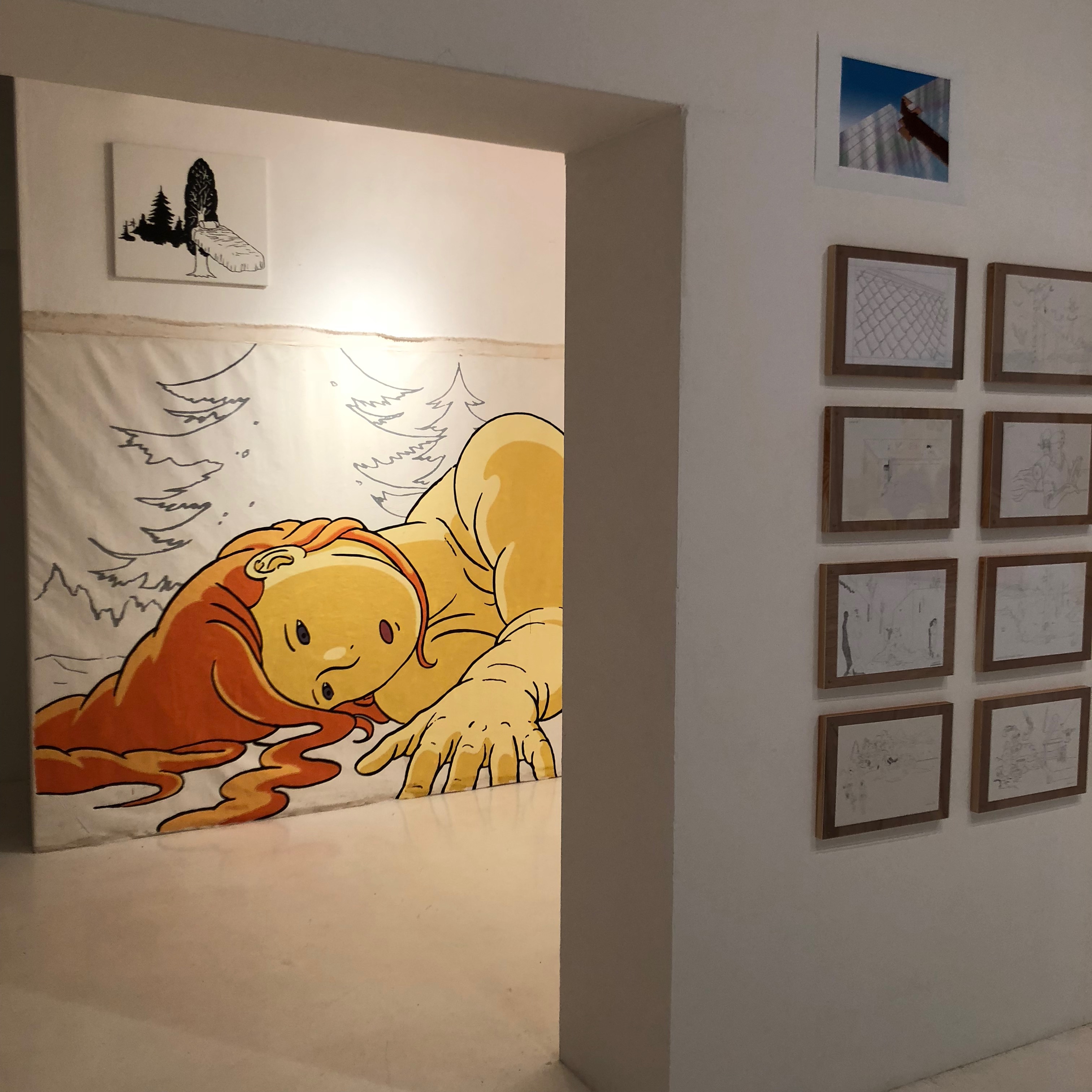 The liminal chasm separating déjà vu and Jamais vu – those uncanny experiences of familiarity and unfamiliarity – is host to a peculiar sensation that transcends both nostalgia and novelty. For lack of a better term, I have dubbed this sensation “super-saptio-temporality,” an elevated perception beyond the fetters of space and time. However, this trance state is elusive, and must be induced by returning to the decidedly unartistic consciousness of my childhood spent engrossed in the anime ubiquitous on Japanese television. I imagine that I am the creator of my own anime series for broadcast, fastidiously crafting a world of plotlines, replete with detailed reference materials. All the while, I deceive my brain with the mantra, “This is not art.” Sometimes, I even make videos. Yet it’s impossible to completely fall for my own rouse, and I encounter a neural short-circuit. It is precisely these moments of cognitive dissonance that produce a feeling of super-spatio-temporality. All too fleeting, I must act quickly. If I manage to capture the experience on paper, then for the time being, that counts as a victory.

From an outsider’s view… Mizuno’s work would possibly be classed as otaku, but it is way beyond and into the beyond. This is not Otaku, this is multifaceted and multi leveled art, showing highly skilled draftsmanship and creating a world that is nostalgic yet discussing a possible future, a retro future. The scenes he creates and the characters that live within them are narrative, but a disjointed narrative, sometimes surreal and dreamlike.

Mizuno takes the elements and feeling, not just of this specific animation but the production of this animation, the materiality of it, the visual tools, the language of process, hand written notations and sequence numbers, the special paper with holes set for camera braces, the drawing and painting techniques… capturing even the smallest detail of pencil lines not ink (which where originally photocopied onto the acetate cel and colored on reverse). The character reference guides that look like a Police line up of weird sculptural creatures and beings, their clothes merging into their bodies. Sentient beings in mid movement, mid metamorphosis, mid conversation. He uses animation view points and captures the landscape in a way that often makes the background into the subject. Always all with an outline.

And with all these visual tools, he has built a universe where solidity and natural law are often mixed up, a space of experimentation, morphing physicality and consciousness in a fibonacci spiral.

Most importantly these still images that show the frozen moment, that would (or could) create animated movement if combined with a thousand more.

Each only one frame from a movie that will never be seen, that doesn’t need to be made. The holy cel.

Kenichiro Mizuno
Born in Gifu prefecture in 1967, now a Tokyo resident Minuzo dropped out Department of Social Development System Engineering, Faculty of Engineering at University of Tottori and graduated from Setsu Mode Seminar. In pursuit of a sense of super-spatiotemporal that exists between déjà vu and jamais vu, he reconstructs in his head the world of TV animation that remains as an origin of his perspective, outputting creation in wide arrays of methods such as drawings, paintings, graphics, animation and so on. He also participates in a video production team Chojo Gensho [Supernatural Phenomenon] and an art unit Saiko Kinenshitsu [Supreme Memorial Room.] He teaches Paintings, Beauty, Pictures, and Manners at Bigakko [Tokyo’s school for movies and art.] He is a part-time lecturer at Visual Media Dep’t, Tohoku University of Art and Design.
His blog Mai Fai (working title)is : http://kenichiromizuno.blogspot.jp/